I’ve had experience with Canfield products starting when I was in the US Military, with 3D cameras, and have been a user of Canfield technology at multiple locations over time. I have been able to watch the software and technology evolve over the last decade and a half. 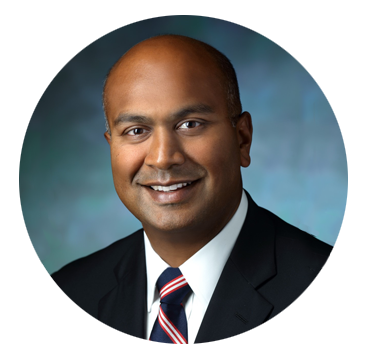 Dr. Kumar currently works at the Rainbow Babies and Children’s Hospital and is the Chair of the Department for Plastic Surgery and Division Chief for Pediatric Plastic Surgery at University Hospital, in Cleveland. In his roles, he directs the Vascular Anomaly Center and the Cleft and Craniofacial Center. Prior to Cleveland, Dr. Kumar also worked at the University of Pittsburgh, Johns Hopkins, and began his medical career in the United States Navy.

Starting with his time in the military, Dr. Kumar has always seen a strong need for accurate image documentation. “I was very much interested in capturing images of what I was seeing as a practicing surgeon. Imaging technology was very important in order for me to try to document not only what I was seeing, but also what I was doing. Documenting outcomes and using detailed measurements was a way to make things better, publish research, and provide a legacy for the people who would come after me. I wanted to be able to pass along to the next surgeon who had to take over, some record of what had been done during various operations.”

Throughout his career, Dr. Kumar has worked with Canfield products and technology, which have helped satisfy his need to accurately capture patient care for future generations to review and study. “I’ve had experience with Canfield products starting when I was in the US Military, with 3D cameras, and have been a user of Canfield technology at multiple locations overtime. I have been able to watch the software and technology evolve over the last decade and a half.”

Dr. Kumar has been able to work with a variety of Canfield products over the years, “I enjoyed using the VECTRA® M5 and the VECTRA® XT at prior institutions. We plan to purchase a VECTRA XT and the newly updated IntelliStudio® in the future. We already have two VECTRA® H1 systems at Rainbow Babies Hospital.”

The 3D image capturing provided by Canfield continues to aide Dr. Kumar in day-to-day activities, as well as with future research endeavors, “We’ve used and published data based on the Canfield imaging technology to better educate not only our patients, but also to advance the field in Craniofacial surgery regarding outcomes after facial skeletal surgery. It would not have been possible, for instance, to evaluate changes in the cleft rhinoplasty or in the mid-face movement with orthognathic surgery without the 3D camera. It helps us look at a problem in a different way and to think about how we want to do surgery in the future. It’s extremely helpful to get detailed, quantified and reproducible data that is noninvasive and does not use radiation, what an amazing tool!”

In pairing with Canfield products, Dr. Kumar has an adult and pediatric medical photographer on staff. April Adams has worked at University Hospital in Cleveland for over twelve years, using Canfield solutions throughout her tenure. “I can’t imagine doing this profession without it. Everything is very organized. For example, batch processing patient images up to 50-75 at a time, I can add an attribute, add a note, add the doctor’s initials, add the photographer’s initials and add the date the photos were taken all at once. This tool in Mirror® is highly effective and saves an incredible amount of time. The attribute tool is also incredible for education and research because it allows me to create a searchable directory under selected words. Currently, the word {Craniofacial} has the longest directory list under the Image Attributes Tab, which offers a wealth of knowledge to anyone searching for specific key words.”

Working alongside Dr. Kumar at The Cleft and Craniofacial Center, as well as The Vascular Anomalies Center, April’s imaging subjects include children born with either a cleft lip, cleft palate or both, as well as many other Craniofacial Anomalies such as: Apert Syndrome, Cherubism, Craniosynostosis, Craniofacial Microsomia, Crouzon Syndrome, Digeorge Syndrome, Goldenhar Syndrome, Micrognathia,  Microtia, Pfeiffer Syndrome, Plagiocephaly, Pierre Robin Sequence and Treacher Collins Syndrome.

“In addition to the Mirror photo system, I also find the VECTRA software and the VECTRA H1 camera incredibly powerful tools. With 3D photos, it’s very detailed in a technical way and we can measure the Cleft Lip with the 3D technology. We can show patients what they will look like postoperatively before they have their surgery. For example, the Genioplasty and Rhinoplasty 3D planning in VECTRA is the most popular and patients really appreciate the technology.”

April cites the improvements in 3D imaging provided by the VECTRA systems. “When I started back in 2006, there was a traditional way of using a ruler, protractor and transparency over the photo, adding the landmarks, which would take sometimes hours. A few years later there was a way to reproduce this digitally using Photoshop and manipulate either the nose or chin, to show the patient what their appearance would look like post-operatively. Now, the VECTRA saves a lot of time where I’m not spending hours planning.”

Dr. Kumar appreciates this newly found efficiency. “We can increase the amount of productivity at all levels because my photographer is not bogged down literally connecting dots and lines. She is able to capture multiple images while the data is quantified. It’s so fast we can actually put it in the patients’ chart as we’re doing it, for instance, when we use the VECTRA H1 camera to measure facial atrophy or expansion for various condition, we are able to document how much volume is being lost or not during periods of time in the patient chart. That would have taken us almost a month to do and now that took us under 30 minutes, maybe an hour at the most.”

In addition to the quick and efficient processes that coincide with Canfield’s 3D solutions, according to Dr. Kumar and April, one of the best features is the reproducible imaging outcomes. “April is able to replicate the same process multiple times, and we achieve the same results each time. I think it’s not only easy, but it’s accurate and I think that’s important.”

Dr. Anand Kumar currently works at the Rainbow Babies and Children’s Hospital and is the Chair of the Department for Plastic Surgery and Division Chief for Pediatric Plastic Surgery at University Hospital, in Cleveland. In his roles, he directs the Vascular Anomaly Center and the Cleft and Craniofacial Center.